skip to main | skip to sidebar

"The Poet" written by Chris Kilgore for Tadhg

The Poet was born in the fall, and died that winter. Now those who knew him tell his story and those who knew of him retell it. And the life that was lived becomes something much more than it was, even though it is now something much less. The Poet never spoke a word, nor acted out his passion any more than to grasp with his whole hand a finger offered by one who loved him. But he had deep gray eyes and he lived. For almost three months he lived.

What is the value of a life lived, what is the exchange rate? Who can answer that question? Is it the sum of our actions, the sum of our thoughts? Is it the number of other lives we touch? Some combination of things or something else unknown? When the young die young it is tempting to project our own ideas of life onto the end of theirs. Of the Poet one might say that as a child he would have been a hell raiser, and as a man a world beater. But it might be a gross misunderstanding to assume that the Poet's life was left unfinished. He never became a child, much less a man, but for nearly three months he lived and in that time lived whole-heartedly. He changed the lives of those around him and those around him continue to change the lives around them, and his story continues to be told.

One would not say that a short story is incomplete because it isn't a novel. It takes all kinds and some stories by their brevity make their point all the finer. The Poet's story is a short story but it is beautiful and it is complete. It is a story about struggle and perseverance, about love and patience and fortitude and it's a story about life, about the value of a life lived be it 90 days or 90 years. The Poet's story is one that is told by those who knew him, and retold by those who knew of him.
For Tadhg Michael Kilgore
October 12, 2007 – January 9, 2008
Posted by Michelle Kilgore at 5:29 PM 4 comments: 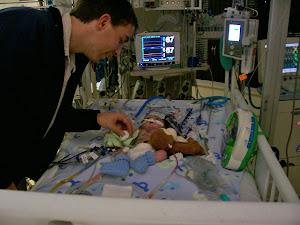